This is an extract from Mali Morris: Painting, a monograph published by RA in 2019. It is the first of seven passages of writing by the artist, as a personal introduction to her work. The book also includes over 140 colour plates, an essay by writer and curator Sam Cornish, and an introduction by the eminent art historian Mel Gooding.

My father was born at the foot of Snowdon, in an isolated house on the edge of a village. He spoke Welsh before he learned English. My maternal grandmother was from the Midlands and when I was born in 1945 my parents were living with her, in Caernarfon, so English was our home language. When I was about ten, although I had no Welsh to speak of, my father explained the complex structures in the poetry he loved, the intricacies of the englyn, with its strict system of repeated consonants and vowels, clear internal rhythms, and a very specific shape on the page. He took me to Trawsfynydd see the statue of Hedd Wyn, who was killed at Paschendale, at the age of thirty.

Later on at school I recognised how my own favourite poet at that time, Gerard Manley Hopkins, had learned from this tradition, using the same patterned forms, but in English. Studying art during the 60s, when we loved all things Zen, the taut compression of the Japanese haiku reminded me of the englyn. I thought it strange that such severe restriction could produce an easy-sounding beauty, how the conventions were a given, but did not interrupt the flow of poetry, or even seem noticeable.

A while before I was born my grandmother bought a second-hand country bus, broken down and out of service. She had seen it advertised in the local paper. Her neighbour, a carpenter, stripped out the seats and replaced them with bunk beds and a primus stove. It was towed a couple of miles to Dinas Dinlle, the nearest seashore, christened Casita, and parked on the edge of an empty field. Every year, I am told, my mother painted it all over with cream gloss, to keep it weather-proofed. I imagine her on the roof, energetically wielding a brush, as I don’t think she would have had a  paint-roller in those days. My first holidays were spent there, and I have faint memories of walking along a sheltered lane to the pebble beach, high reeds on either side, and the sudden opening up of space, the forwards and backwards and sideways of it, with the horizontal of the distant horizon, always ahead, never grasped.

I don’t know if these memories have influenced the way my painting developed; I’ve picked them out from the many because they lead me now to think of family, language, the materials and movements of painting, and finding myself in the space of the world.

Mali Morris in her studio at Creekside, south London, in 2019. Photo: Fred Scott 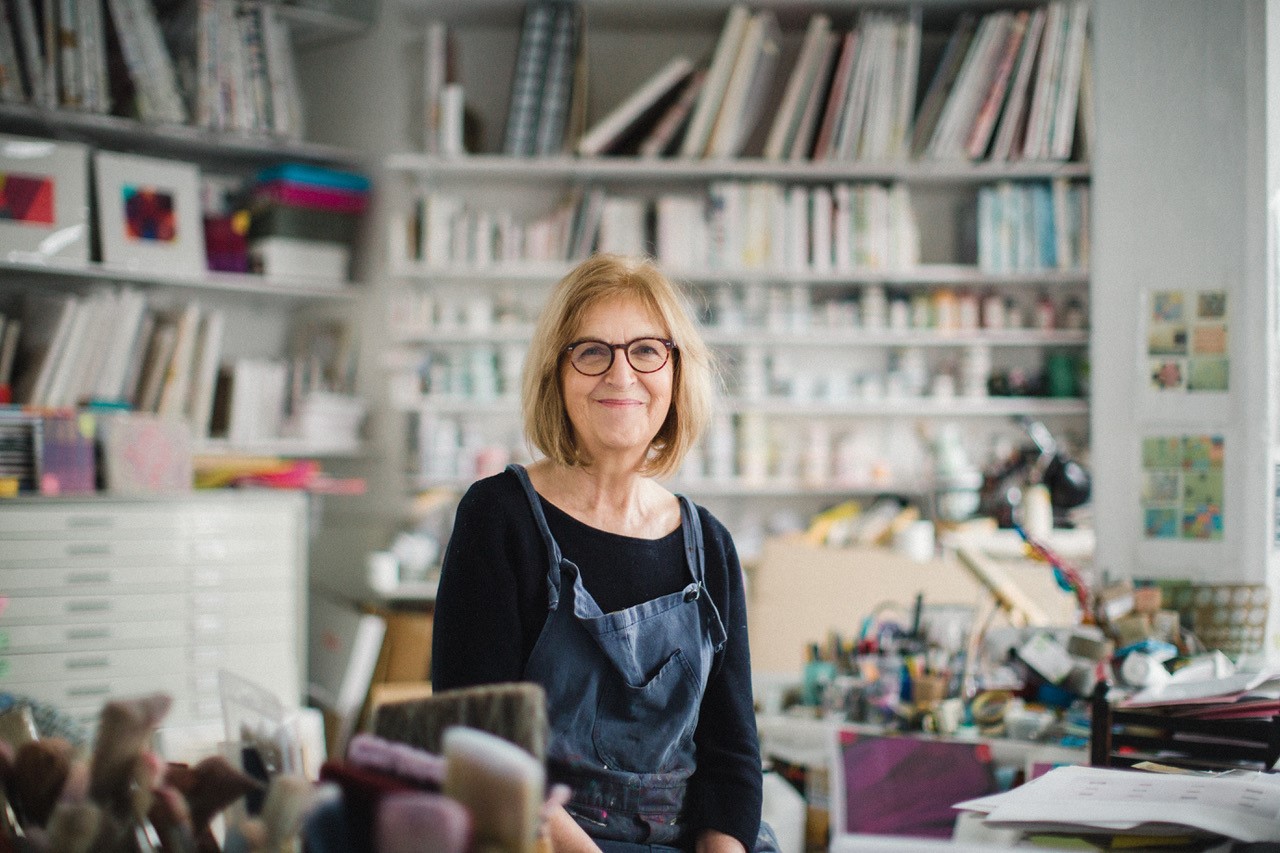